I just call it All

I had the opportunity to read the following little story at the first ever Inspirational Writers Read at Brewed Cafe on Sabino Canyon Road in Tucson last week. It was an honor being part of this great experience. Thanks to Andrea Owen and Cafe owners Phil and Kate for making it all possible. 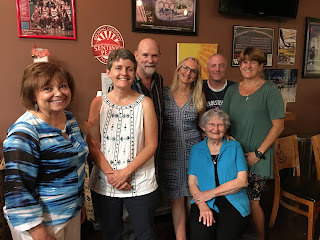 Over the past few years I’ve been making more of an effort to know God intimately, trying to abide in His presence as I walk out each day. What I’m beginning to realize is that it’s not about having my head on some heavenly plane, but more about knowing His Word and then following my conscience when He’s whispering beneath the roar of my flesh. He’s teaching me these things, not through some kind of divine revelation, but mostly through daily experiences. And often through my own failings.…

All
I first discovered the electric bike—more commonly known as ebike—while taking a ride along the beach in Santa Monica and watching several riders effortlessly glide past me. I’ve always enjoyed riding bikes, and have often wished I could leave the car behind and ride to work. Tucson has more than 100 miles of off-road paved bike paths, providing a great venue to commute to work away from traffic. The problem is that I work twenty-five miles away from where I live and I’m not exactly a fast rider. It would take me too long to get there and leave me too haggard and sweaty for work. But if I were riding an ebike instead of a regular bike, then maybe, just maybe the impossible could become possible. The best part is that I could ride most of the way on the Loop—an off-road paved bike path that circles Tucson.

I began looking online and found the perfect ebike for $1,500. My kids and my parents pitched in a cumulative $500 as a birthday gift, and by November I had my ebike: A RAD-City commuter. I was ready.

To be honest, I saw the posted sign on the path that states “Motorized Vehicles Prohibited,” but surely this rule didn’t apply to me. After all, my ebike is a Class 2. This means that it only moves if I’m pedaling and maxes out at 20 mph. It also has a handy throttle that helps me start from a dead stop, but I rarely use it because it drains the battery.  The minute I hit 20, a governor in my engine slows me down. Experienced cyclists often pass me at speeds exceeding 30 mph.

So I continued riding the Loop with a clear conscience.

And then one morning in June a voice barked at me from behind. “Hey! Is that an ebike?”
Startled, I stopped and turned around. An older man decked out in riding gear had stopped just behind me, breathless but looking very determined.

“Is that an ebike?” he said, pointing an accusing finger at the battery on my bike.

The fact that this man was trying to prevent me from riding a safe route to work galled me.

“Because it’s illegal,” he said.

“Because those are the rules,” he said. “No motorized vehicles on the Loop. Look it up. Haven’t you seen the signs?”

“But why are they the rules?” I said. “It makes no sense. I can’t ride as fast as most cyclists.”

Finally the man spluttered out that ebikes were dangerous. Even if I knew how to handle my ebike, he said, other people riding them might not know how to handle them safely.

I told him that he just made a completely arbitrary statement. After all, I could easily say that about any bike. Should all bikes be illegal on the Loop because they could potentially be dangerous to some riders? Then I told him to leave me alone and rode off.

I was steaming mad. Here I was, going out of my way to be a model citizen, and this self-appointed Loop watchdog had the audacity to tell me that I was doing something wrong.

So I went online and found a chat service for the Loop. I typed out what had happened and asked whether my Class 2 ebike was really illegal on the Loop. The person who answered me confirmed that the no-motor rule applied to all ebikes—no exceptions, but suggested I leave a comment with the board overseeing the Loop. And so I took my case there, making sure to tell them how safe my ebike was and how much better it would be if they encouraged bike commuting by allowing an exception for pedal assist ebikes.

Their response? I received an email back stating that all ebikes were illegal on the Loop and that the board was working to make sure that ebikes would not be allowed on any of the connecting paths to the Loop as well.

Wow. Deflated and still angry, I told my sad tale to my friends. And being the good friends that they are, they commiserated with me. Just ignore the rule and the grumpy old man, they said.

“Have the police stopped you?” one friend asked.

“No,” I said. “I’ve even ridden past two policemen and they didn’t say anything.”

“Well, there you go then. You should just keep riding it unless the police say something.”

This made perfect sense. And I was almost convinced to follow his advice, except for one thing. My conscience was pricking at me. I had a suspicion that God might be using this whole thing to get my attention.

And so I set it before God in prayer. It didn’t take long to get an answer. The still small voice of the Holy Spirit spoke to my conscience.  How did you treat the man who stopped you? Did you respect him? Were you filled with grace? Did you show him My love?

Sadly, I admitted that I had had no intention of being respectful or kind. I was far too interested in justifying my own behavior. I also realized that I have a huge problem showing kindness and love to people I believe are being unkind to me.

So I confessed my behavior and my wrong attitude to God, asking Him to help me become a better example to others.

But my conscience was still bothering me. I had a feeling there was still some unfinished business I needed to address. So, a few days later I asked God, “What about the rule banning ebikes from the Loop? Do I really have to obey it?”

What does My Word say?  The voice whispered.

Several scriptures came to mind. “That I’m supposed to obey manmade laws because the authorities who made them were placed there by God for my good?”

“But does that really apply here? It’s just a stupid rule. Do I still have to obey it if it doesn’t make sense?”

What does my Word say?

Reluctantly, I answered: “As long as it doesn’t come against the law of God I’m obligated to respect and follow the rules set over me.”

So there it was. My conscience seared by the Word of God, I surrendered and repented. I haven’t ridden my ebike at all since that fateful day because, frankly, it’s been too darn hot. But I’ve decided to ride to work on the roads instead of the Loop once the weather cools. Do I still think it’s unfair? Yes. But that seems like a minor issue now.

Clearly God is doing a deeper work in me, and I desperately I need His help to see me through.

The odd thing is, once I came to this realization and surrendered what I already knew to be true in theory, I was no longer filled with anger or disappointment. I wasn’t even discouraged over failing so miserably to be a positive witness for Christ. Instead, I was awed and amazed. God almighty had taken the time to intervene into my little life to show me areas that needed correction so that I could draw closer to Him. When you really think about it, that’s amazing!

As A. W. Tozer writes in his book The Pursuit of God: “God wants us all, and He will not rest till he gets us all. No part of the man will do.”

Note: I just found out that there is a petition going around to help make Class 2 ebikes legal on the Loop. So if you're a Tucson resident and feel sorry for me after reading this story, please sign the petition :-). Here is the link: https://www.pedegoelectricbikes.com/petition-for-class-2-electric-bikes-to-have-access-to-the-loop/

There is a safe & effective Natural Herbal Medicine. For Total Cure Call    +2349010754824,  or email him   drrealakhigbe@gmail.com       For an Appointment with (Dr.) AKHIGBE contact him. Treatment with Natural Herbal Cure. For:Dengue Fever, Malaria. Painful or Irregular Menstruation. HIV/Aids. Diabetics. Vaginal Infections. Vaginal Discharge. Itching Of the Private Part. Breast Infection. Discharge from Breast. Breast Pain & Itching. Lower Abdominal Pain. No Periods or Periods Suddenly Stop. Women Sexual Problems. High Blood Pressure Chronic Disease. Pain during Sex inside the Pelvis. Pain during Urination. Pelvic Inflammatory Disease, (PID). Dripping Of Sperm from the Vagina As Well As for Low sperm count. Parkinson disease. Obesity, Lupus.  Cancer.  Tuberculosis.  Zero sperm count. Bacteria, Impotence Fertility,Protoplasmic, Diarrhea. Hepatitis A&B, Rabies. Asthma.  Quick Ejaculation. Gallstone, Cystic Fibrosis, Schizophrenia, Crubs, Cirrhosis,  Premature Ejaculation. Herpes. Joint Pain. Stroke. Cornelia Disease, Weak Erection. Ovarian problem,  Erysipelas, Thyroid, Discharge from Penis. Bronchial Problem,  HPV.  Hepatitis A and B. STD. Smallpox, Staphylococcus + Gonorrhea + Syphilis. Heart Disease.  Pile-Hemorrhoid.rheumatism,  Impotence, thyroid, Autism, Sepsis Bacteria,  Penis enlargement, Prostate Problem,  Waist & Back Pain.  Male Infertility and Female Infertility. Etc. Take Action Now. contact him & Order for your Natural Herbal Medicine:  +2349010754824  and email him    drrealakhigbe@gmail.com    Note For an Appointment with (Dr.) AKHIGBE.I suffered in Cancer for a year and three months dying in pain and full of heartbreak. One day I was searching through the internet and I came across a testimony of herpes cure by doctor Akhigbe. So I contacted him to try my luck, we talked and he sent me the medicine through courier service and with instructions on how to be drinking it.To my greatest surprise drinking the herbal medicine within three weeks I got the changes and I was cured totally. I don't really know how it happens but there is power in Dr Akhigbe herbal medicine. He is a good herbalist doctor.